EXCERPT FROM THE SERMON "TRADITIONS" PREACHED ON JUNE 1, 2014 at FCC

Traditions in and of themselves are not bad.  Churches have traditions.  Families have traditions.  Towns have traditions.  Traditions are everywhere!  It is when we elevate traditions to the status of God's Word - that is when we get ourselves into trouble.  In Matthew 15, Pharisees and teachers of the law travel from Jerusalem to check out some of the things they had heard about Jesus.  They witness Jesus' disciples failing to wash their hands before eating and call them out.  "Why do your disciples break the tradition of the elders?  They don't wash their hands before they eat!" (NIV)  Did you notice that?  The Pharisees and teachers were not accusing the disciples of breaking a commandment of God but rather a TRADITION!  You see, over time traditions had become just as important as law - so much so that Pharisees considered breaking God's law and breaking tradition one in the same.  But look at what Jesus does.  He turns it around on them.  He asks them, "Why do YOU break the COMMAND of God for the sake of YOUR tradition?" You see, the Pharisees embraced tradition over God's Word!  The example He gives is the command to honor your mother and father.  This command included financially supporting your parents in their old age.  Well, some of the Pharisees did not want to use their money to support their parents, so what did they do?  They created a tradition!  "Whatever help you might otherwise have received from me is a gift to God." (MATT. 15:5 NIV)  In other words, if they devoted their money to God then their money was no longer considered theirs; therefore, they were no longer obligated to honor their parents financially.  Jesus had some tough words for them (and for us).  He tells them their tradition nullified the Word of God...made the Word of God pointless.  They had elevated tradition to a level that actually superseded God's commands!  They embraced their tradition over God's Word!  Churches are notorious for allowing their traditions to get in the way of genuine worship.  Churches split over traditions!  Why?  Because...

I want you to notice something in our scripture here.  Notice whose hands the bread is in when the miracle occurs.  It's not in the hands of Jesus.  It's in the hands of the disciples!  "He [Jesus] blessed and broke them, and gave them to the disciples to set before the multitude."  (Luke 9:16b - NKJV)  Jesus gives the blessed bread to the disciples and THEY feed the multitude!  I may be wrong, but it seems many Christians today fail to accept their power and authority in Christ.  Through Christ, WE have the ability to make the mountains move!  Jesus tells us straight up in John 14:12, "He who believes in me, the works I do he will do and greater works than these he will do."  This verse tells me that with 12 men, God can change the world!  With a small congregation, God can transform a community!  If we come to God with a child-like faith - leaning on HIS understanding, not our own - then anything is possible.  The greatest stumbling block to experiencing all that God has for us and all that God can do through is is our own understanding.  It gets in the way every time! 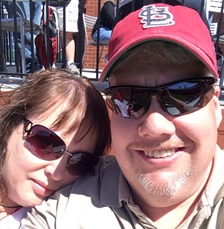 ​Pastor Kurt Sanders has been the minister of FCC for 9 years.   In 2007, he graduated from Christian Theological Seminary with a Master of Divinity and accepted the call at FCC shortly thereafter.  He currently resides in Benton, IL with his wife Kassie and are the proud parents of four children: Kortni Sanders, Karlee Pecka, Kurtis Sanders and Kendra Pecka.  They also have two cats, one dog and two turtles!  Pastor Kurt is currently pursuing his Doctorate in Biblical Studies.

EXCERPT FROM THE SERMON "HE COULD HAVE SAVED HIMSELF" PREACHED ON MARCH 15th, 2015 at FCC

The idea behind self-preservation is that we will instinctively do whatever we can to protect ourselves from harm, injury or even death.  When a child falls off his bike, he will instinctively throw out his hands to catch himself.
When Jesus was crucified, those standing around the base of the cross shouted, He saved others; let Him save Himself if He is the Christ of God, the Chosen One.  If you are the King of the Jews, save yourself! (Luke 23:36 -37)  Since Jesus did not save himself from pain and agony (self-preservation), those at the base of the cross concluded that He must not be the Son of God.  But what they did not understand was the fact that Jesus was actually CHOOSING THE CROSS!
Jesus had plenty of opportunities to save Himself.  He could have slipped into the darkness of the shadows at the Garden of Gethsemane.  He could have pled His case before Pilate (especially since Pilate found no fault with Jesus).  He could have come down from the cross and demonstrated His absolute power and authority – but He didn’t.  Why?  Because Jesus could not save both Himself AND you.  Jesus chose the cross over self-preservation so that the doors of heaven would be opened for you.
This Easter Season, I encourage you to choose Christ over self-preservation.  Embrace all that Jesus has for you – the good, the scary, the challenging – ALL OF IT!  And allow the Spirit of God to transform you into His masterpiece!